The Pros and Cons of drinking green tea while fasting

Here are the benefits and drawbacks of green tea during intermittent fasting which I observed during many month of omad and 16/8 time restricted feeding.  Here I will explain them based on my understanding of the research behind caffeine and fasting. 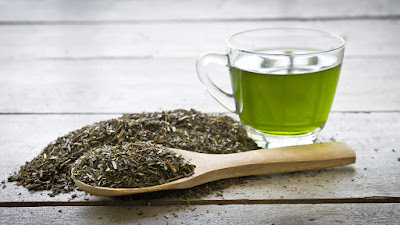 Let me begin with a short introduction of the effects of caffeine on the human body that are relevant to fasting. Caffeine stimulates the adrenal glands to release  cortisol and adrenaline. Those two small glands above the liver will be forced to produce more than necessary for the moment. This causes a rush of energy above normal levels. A good feeling of arousal and alertness is the result. Free fatty acids are increased in the blood to be oxidized for energy. So far so good. The fasting energy state of the body is enhanced in the short term.

But in the long term, an adaptation to the intake of caffeine will take place. Habitual consumers of caffeine have been shown to not have an increased release of cortisol anymore. That is actually a good adaptation. You would not want to have high levels of cortisol in your body in the long term.
This also means though that your body will become dependent on caffeine to a degree in order to release those "normal" levels of hormones. Your body strives for homeostasis.

And caffeine causes a constant low level of stress for the adrenal glands. And so they will compensate with lower levels of cortisol and adrenaline without the stimulation of caffeine. This results in a disruption of the circadian rhythm, result in tiredness in the morning and arousal late at night. And in my own experience this leads to a low level depression or uneasiness and tiredness.  Whenever I am through the caffeine-withdrawal symptoms, I feel much more stable in my mood. No green tea high, no green tea low.

With further experimentation I have found out that I was consuming the green tea wrong though. Because cortisol is not constant in the body throughout the day, it follows a curve. Right after waking up, the release of cortisol reaches it's peak. And if you want to avoid most of the negative side effects of caffeine, it is best not to take first thing in the morning. So I guess most people consume it wrong.

As you can see in the graph below, it is best to wait about two to three hours after waking before starting to consume anything with caffeine. That is when your cortisol has started to drop again and caffeine will not cause the peak to be even higher. Increasing the cortisol level beyond that natural peak is just causing you to feel fatigued in the long-term and become dependent on caffeine to wake up in the morning.

Fasting itself raises cortisol. So be careful here and closely observe how you feel and react to caffeine in the long term, if you are eating only one meal per day or use extended intermittent fasting. In my experience I do best while I consume 2-3 cups of green tea and on cup of decaf coffee per day. I usually consume the green tea between 9am and 1pm and the decaf coffee before my workout. That gives my body enough time to clear the caffeine from my system before I go to bed.

In addition, green tea contains an amino acid called l-theanine. This amino acid has been shown to have amazing effects on the brain. You can watch this video for a summary of the research results.
L-theanine counteracts some of the effects of caffeine. Green tea therefore makes you calm and focused at the same time. Compared to coffee, which usually only makes you more alert, but also leaves you feeling a little jittery.

Be aware though that you will also develop a dependency towards green tea. If you start consuming it daily, even in the optimal window, you will want to consume it daily to reach your normal levels of energy. But as there are only positive side effects to green tea consumption, there is no reason to not consume it on a daily basis. Withdrawal symptoms can vary from person to person. But in my experience they are quite strong and I have a bad headache for 2-3 days and also feel quite low in motivation and even depressed for a couple of days.
Newer Post Older Post Home